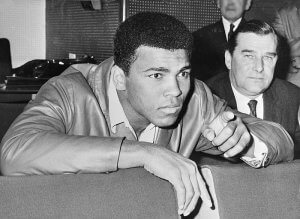 The son of legendary boxer Muhammad Ali was detained for many hours at the Florida Airport earlier this month by the immigration officials. This news was made public by a family friend.

According to the source, Muhammad Ali Jr., 44, and his mother, Khalilah Camacho-Ali, which is the second wife of Muhammad Ali, were both arriving at Fort Lauderdale-Hollywood International Airport back on February 7 after returning from speaking at a Black History Month event in Montego Bay, Jamaica.

At the passing point, the immigration officials let Camacho-Ali pass only after she showed them a photo of herself with her ex-husband. Unfortunately, since the son didn’t have any proof with him, he was detained. According to Mancini, officials held and questioned Ali Jr. for nearly two hours. They were constantly asking him: “Where did you get your name from?” and “Are you Muslim?” The thing is, Ali Jr. was born in Philadelphia in 1972 and holds a U.S. passport, despite the fact he is a Muslim.

According to Mancini, the line of questioning is indicative of profiling and designed to produce answers that corroborate what officials want to hear. Neither Camacho-Ali nor Ali Jr. have ever been subjected to detainment before.

Previous Documents you need to travel outside and then reenter the U.S
Next Who qualifies for the EB-5 Investor Visa?