Pope Francis will speak with immigrants during his visit in the U.S. 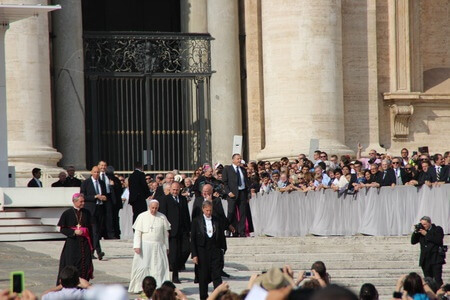 Pope Francis’s historic visit in the States is longingly expected by the national institutions and immigrant communities in several cities across the country. Speaking on immigration laws is not to be excluded, knowing that the Bishop of Rome is a vocal supporter of immigrants, regardless of their nationality, and especially of Hispanic children who cross the Mexican border into the U.S., and whose situation in the States is extremely delicate. More than that, Cardinal Oscar Rodríguez Maradiaga said at some point that the Holy Father would have even entered the U.S. through Mexico if he had the time.

The pontiff will address the Congress on September 24, and there is a high chance that immigration will be included in the list of topics which the Pope will talk about. There are over 160 Catholics in the Congress, and most of them agree with his point of view on this matter.

On September 26, Pope Francis will arrive at Philadelphia’s Independence Mall, where he will speak with local immigrant communities.

2015-08-26
Cristina
Share
Previous By 2050, 36.9 percent of the U.S. population will be first and second generation immigrants
Next Best types of jobs to become a permanent resident in the U.S.