Employees fired after joining “A day without Immigrants” protest 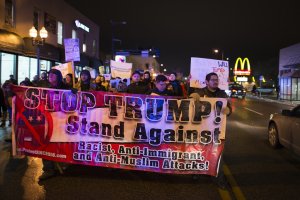 Many protesters were fired from their job after participating in last week’s “a day without immigrants” protest. In Florida, Tennessee, Oklahoma, and also New York, many managers fired their workers for skipping work and participating in the protest. Most of the businesses that took these measures where restaurants and day cares.

Only in Tennessee, more than 20 workers at Bradley Coating, Incorporated – a commercial painting company, were fired. At the same day, in Florida, several staff members at Grace Community School after participating in Thursday’s protest were fired too.

On Friday, more than 25 workers were fired in New York immediately after they returned to work. These major fires were made at Ben’s Kosher Delicatessen Restaurant & Caterers in Long Island, New York.

This restaurant even disputed a report saying that many of their workers, who participated in the protest, had constantly pressured the other ones that had decided to continue their shifts to participate in the “A day without immigrants” protest. According to the restaurant’s owner, despite the employer’s human rights to participate in the walkout, they have no right to pressure the others to walk out with them and force them to leave their shifts.

Many social media users have constantly been calling online many other workers to boycott their job ad join them in the protest. This call is specifically made for small businesses and restaurant workers.

Previous #adaywithoutimmigrants Protests close restaurants across the USA
Next According to Trump, the number of immigrants for deportation will be increased