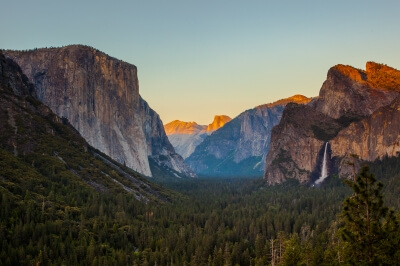 The U.S. was the first nation to design a set of laws to protect natural landscapes from human intervention. Yellowstone, in Wyoming, is the first national park ever, established by the U.S. Congress in 1872.

Yosemite Park in California is a conglomerate of natural wonders. Yosemite Falls is North America’s highest waterfall, and El Capitan is the tallest uninterrupted granite monolith in the world. With such amazing landscapes, it’s no wonder that the area is considered a crown jewel of the national parks in the United States.

Whether you are passionate about geography or not, chances are you have at least heard about the Grand Canyon in Arizona, if not even seen pictures or movies about this wonder of nature. The Colorado River has done an outstanding job carving the canyon in various shapes and colors. About five million people choose the Grand Canyon as a touristic destination every year.

Joshua Tree National Park takes its name from the Joshua trees (Yucca brevifolia), representative for the area. More than half of the park is a designated wilderness area, including two deserts. It’s a perfect destination for climbing, hiking, bird watching, camping and stargazing.

Pinnacles National Park, also in California, is divided by rocks into East and West Divisions. It offers an amazing and savage view that cannot be found anywhere else.

Big Bend National Park in Texas is a land of wild beauties and contrasts, and serves as boundary between Mexico and the United States. Its harsh environment might look uninviting, but is home to more than 1200 species of plants, 450 species of birds, 56 species of reptiles, and 75 species of mammals.

Sequoia National Park in California was established in 1890, and is famous for its ancient redwoods, which contain some of the largest trees in the world. The area is like a magic window to the past, with a landscape that resembles Sierra Nevada before the Euro-American settlement.

Olympic National Park in Washington is so beautiful that it almost seems unreal. Some of the park’s landscape has survived hundreds of years of history and has managed to keep it pristine beauty.