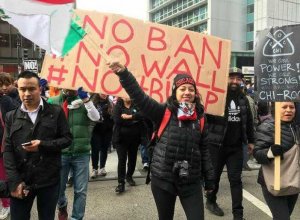 In many cities nationwide, restaurants were closed in the name of “a day without immigrants” protests. The restaurant owners, didn’t just close their restaurants, they also made everyone clear the reason behind these actions by putting a sign in their windows expressing their solidarity with the other striking workers that were participating in the protests.

The reason behind these measures was to show the enormous impact immigrants have on the economy. Most of the restaurants owners closed only their kitchen, but, many others closed their entire business to show fully support at #adaywithoutimmigranys protests.

These couple of weeks, similar growing actions are been demonstrated by many business and corporates in order to demonstrate their displeasure with the Trump’s administration policies. Even though Immigrant’s Right organizations were the first to show their support and organize these types of protests, they were soon followed by many other organizations and corporates.

These series of strikes include also the Yemeni grocery stores that closed throughout the NYC earlier this month, to protests against Trump’s travel ban executive order. Also, on Friday, more than 80 locations all across the country hosted different events that aimed at building towards these series of strikes and the participants stayed at home and didn’t go to work, schools or didn’t spent money on businesses.

Previous Intel will invest $7 billion in the state of Arizona and employ more than 3,000 people
Next Employees fired after joining “A day without Immigrants” protest