5 business schools in USA where graduates earn more than $150,000 per year 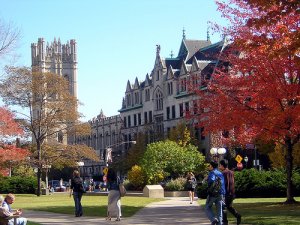 In an interesting recent report from online lender called SoFi, highlights some of the MBA programs that bring the highest average annual salary for their graduates who have been three years out of school.  Some of them lead to annual earnings of more than 150,000 dollars. Well, spending thousands of dollars and in many cases, 100,000$ or more for these business schools, you’re going to expect a decent amount of salary after graduation years right?

This university is a little pricy, but, it offers some advanced business classes and programs for everybody to choose. The average estimated salary for its post-graduates is around 155,000 dollars. And, the debt is around 117,000 dollars for the whole three years of attending one MBA program.

For this prestigious university, the annual salary for post-graduates is calculated to be around 151,300 dollars. On the other hand, the three-year debt is estimated around 98,700 dollars.

This is one of the universities that cost some serious money for its students, but, it is also considered to be one with the most requested programs in USA. Maybe that’s because of the benefits you get to have after the graduation years. The average annual salary after three years of graduation is estimated to be around 171,000 dollars. The average student debt for a completed program is estimated to be 128,000 dollars.

Previous The Minimum Wage Increases In 21 USA States In 2017
Next immigrants in the U.S are the Country’s biggest innovation source