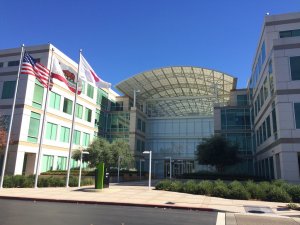 According to chief executive, Tim Cook, only last year, Apple admitted to spent more than $50 billion only at U.S-based suppliers including 3M (MMM.N) and Corning (GLW.N).

When speaking to an annual shareholder meeting, Tim Cook gave made these data public at the time when Apple has come under pressure from President Donald Trump for building its iPhones in China. He also admitted that Apple also wants to work with Trump on issues like bringing back its offshore profits at lower tax rates.

He added: “We’re always looking for more ways to help our country. We know that Apple can only exist in the U.S.”

Apple’s stock is trading at record highs on expectations of improved iPhone demand this year. All the shareholders at the meeting at Apple’s headquarters located in Cupertino, California, agreed for a proposal that would have let them nominate two directors on the company’s board. The proposal won at about 32 percent of votes.

Shareholders also defeated a proposal to require Apple executives to retain their shares until they retire. That vote won by almost 25 percent. Also, on the other hand, an advisory vote to approve executive pay won 95.2 percent support.