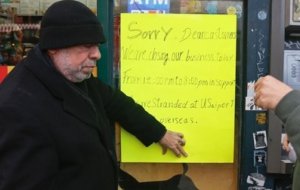 There have been a couple of days now that hundreds of New York City Bodegas, restaurants and grocery stores are temporarily closed. All these businesses are owned by Yemeni Americans.

These measures are taken as a form of protest for Trump’s executive order to ban all immigrants from 7 Muslim countries, even the ones containing green cards, from entering the United States for at least 3 months.

All store owners, the Yemeni Americans, have been claimed that their communities are the ones that are mostly affected by this executive order. The images of bolted-up bodegas and grocery stores are currently trending on twitter under the hashtag #BodegaStrike.

Since many of these families have been directly affected by this order, they are taking this time to reflect and stay close to their community by giving the necessary support and protest against this situation.

After the New York City Taxi Workers Alliance went on strike over the last weekend, many businesses have been searching for ways to protest and make their opinion clear enough to the government. That is why, Yemeni communities, despite how difficult closing their businesses might be, they are convinced to make people more aware of how this executive order is affecting them. They have been paralyzed and unable to normally continue their everyday life since most of them are directly affected by these measures.