During the last quarter, U.S economy grew at 3.5 % 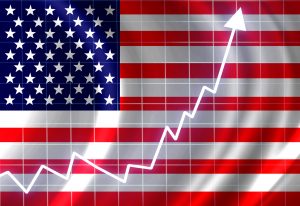 U.s economy had the fastest pace in two years! According to Washington (AP), the economy grew at 3.5% annual rate from July to September. Even though this growth is not expected to last, it still shows a significant increment that has to be taken into consideration when calculating all the factors.

The U.S economy’s acceleration for the last quarter marked a sharp growth from the annual growth of 0.8 percent in the first quarter and 1.4 percent in the second one. Regarding the October to December quarter, the last one, is still expected that the growth will slow to a roughly 1.5 %.

When calculating the gain in the gross domestic product, the economy’s total output of goods and also services, had come from the added strength in consumer spending. Also from the government sector, the Commerce Department and business investment. The annual growth that the government had previously estimated for the last quarter’s annual growth rate was 3.2 percent.

President-elect Donald Trump admitted he had criticized the sluggish pace of this growth during the campaign and also claimed that his economic policies would accelerate annual GDP growth over 4%. In order to do that, Mr. Trump admitted he would eliminate many government regulations by boosting the spending on the nation’s aging infrastructure and slash taxes.

According to experts and economists, the total annual growth is likely to be 1.5 percent. This is actually a lower number that the 2.6 growth of the year 2015. It would be also the weakest since 2009 when economy shrank 2.8 percent, considered to be the worst economic downturn since 1930s.